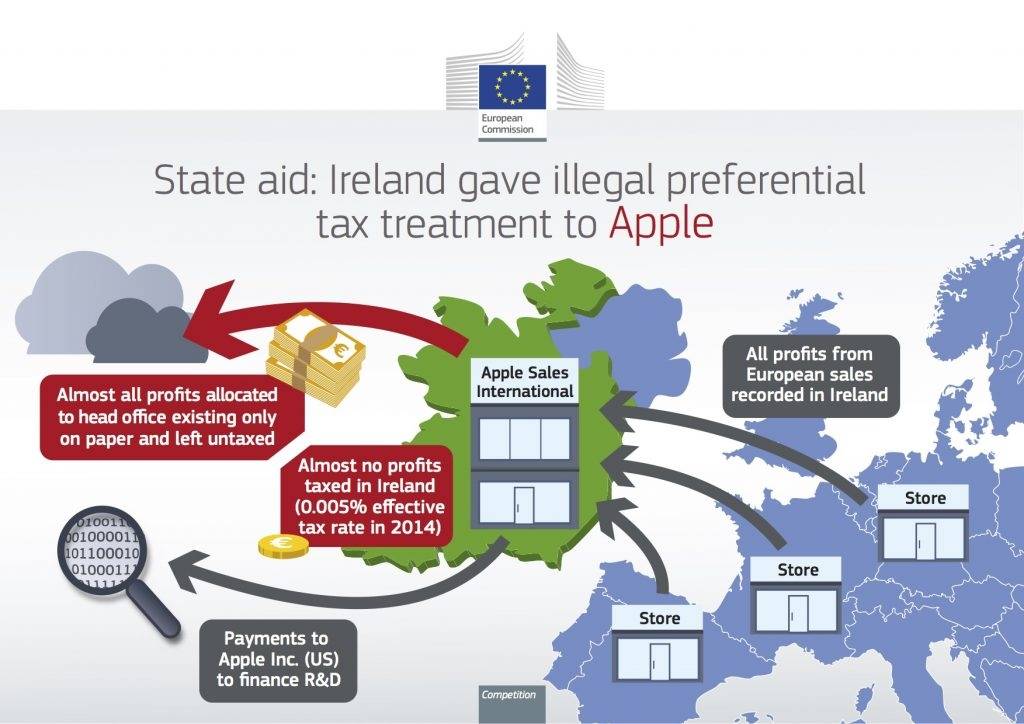 En su versión original, Commissioner Margrethe Vestager, in charge of competition policy, said: "Member States cannot give tax benefits to selected companies – this is illegal under EU state aid rules. The Commission's investigation concluded that Ireland granted illegal tax benefits to Apple, which enabled it to pay substantially less tax than other businesses over many years. In fact, this selective treatment allowed Apple to pay an effective corporate tax rate of 1 per cent on its European profits in 2003 down to 0.005 per cent in 2014."

Following an in-depth state aid investigation launched in June 2014, the European Commission has concluded that two tax rulings issued by Ireland to Apple have substantially and artificially lowered the tax paid by Apple in Ireland since 1991. The rulings endorsed a way to establish the taxable profits for two Irish incorporated companies of the Apple group (Apple Sales International and Apple Operations Europe), which did not correspond to economic reality: almost all sales profits recorded by the two companies were internally attributed to a "head office". The Commission's assessment showed that these "head offices" existed only on paper and could not have generated such profits. These profits allocated to the "head offices" were not subject to tax in any country under specific provisions of the Irish tax law, which are no longer in force. As a result of the allocation method endorsed in the tax rulings, Apple only paid an effective corporate tax rate that declined from 1% in 2003 to 0.005% in 2014 on the profits of Apple Sales International.

This selective tax treatment of Apple in Ireland is illegal under EU state aid rules, because it gives Apple a significant advantage over other businesses that are subject to the same national taxation rules. The Commission can order recovery of illegal state aid for a ten-year period preceding the Commission's first request for information in 2013. Ireland must now recover the unpaid taxes in Ireland from Apple for the years 2003 to 2014 of up to €13 billion, plus interest.

In fact, the tax treatment in Ireland enabled Apple to avoid taxation on almost all profits generated by sales of Apple products in the entire EU Single Market. This is due to Apple's decision to record all sales in Ireland rather than in the countries where the products were sold. This structure is however outside the remit of EU state aid control. If other countries were to require Apple to pay more tax on profits of the two companies over the same period under their national taxation rules, this would reduce the amount to be recovered by Ireland.

Apple Sales International is responsible for buying Apple products from equipment manufacturers around the world and selling these products in Europe (as well as in the Middle East, Africa and India). Apple set up their sales operations in Europe in such a way that customers were contractually buying products from Apple Sales International in Ireland rather than from the shops that physically sold the products to customers. In this way Apple recorded all sales, and the profits stemming from these sales, directly in Ireland.

The two tax rulings issued by Ireland concerned the internal allocation of these profits within Apple Sales International (rather than the wider set-up of Apple's sales operations in Europe). Specifically, they endorsed a split of the profits for tax purposes in Ireland: Under the agreed method, most profits were internally allocated away from Ireland to a "head office" within Apple Sales International. This "head office" was not based in any country and did not have any employees or own premises. Its activities consisted solely of occasional board meetings. Only a fraction of the profits of Apple Sales International were allocated to its Irish branch and subject to tax in Ireland. The remaining vast majority of profits were allocated to the "head office", where they remained untaxed.

On the basis of the same two tax rulings from 1991 and 2007, Apple Operations Europe benefitted from a similar tax arrangement over the same period of time. The company was responsible for manufacturing certain lines of computers for the Apple group. The majority of the profits of this company were also allocated internally to its "head office" and not taxed anywhere.
Commission assessment

Tax rulings as such are perfectly legal. They are comfort letters issued by tax authorities to give a company clarity on how its corporate tax will be calculated or on the use of special tax provisions.

The role of EU state aid control is to ensure Member States do not give selected companies a better tax treatment than others, via tax rulings or otherwise. More specifically, profits must be allocated between companies in a corporate group, and between different parts of the same company, in a way that reflects economic reality. This means that the allocation should be in line with arrangements that take place under commercial conditions between independent businesses (so-called "arm's length principle").

In particular, the Commission's state aid investigation concerned two consecutive tax rulings issued by Ireland, which endorsed a method to internally allocate profits within Apple Sales International and Apple Operations Europe,two Irish incorporated companies. It assessed whether this endorsed method to calculate the taxable profits of each company in Ireland gave Apple an undue advantage that is illegal under EU state aid rules.

The "head office" did not have any employees or own premises. The only activities that can be associated with the "head offices" are limited decisions taken by its directors (many of which were at the same time working full-time as executives for Apple Inc.) on the distribution of dividends, administrative arrangements and cash management. These activities generated profits in terms of interest that, based on the Commission's assessment, are the only profits which can be attributed to the "head offices".

On this basis, the Commission concluded that the tax rulings issued by Ireland endorsed an artificial allocation of Apple Sales International and Apple Operations Europe's sales profits to their "head offices", where they were not taxed. As a result, the tax rulings enabled Apple to pay substantially less tax than other companies, which is illegal under EU state aid rules.

This decision does not call into question Ireland's general tax system or its corporate tax rate.

Furthermore, Apple's tax structure in Europe as such, and whether profits could have been recorded in the countries where the sales effectively took place, are not issues covered by EU state aid rules. If profits were recorded in other countries this could, however, affect the amount of recovery by Ireland